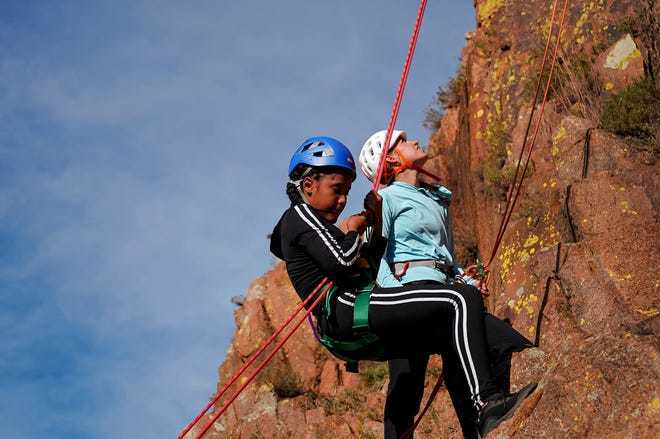 A mother-daughter duo with a passion for mountain climbing recently took a metro-area Girl Scout troop to new heights.

Valari Wedel, 62, has been mountain climbing for more than 20 years, while her daughter Jess Wedel, 33, had been a lover of the outdoors but took to the sport in earnest after a battle with cancer. The two have been climbing together for years and even attempted to climb Mount Everest in May 2021.

The Edmond women recently inspired members of Girl Scout Troop 645 to take on a mountain during an outing in the Wichita Mountains. The pair led the excited group of Millwood School fifth graders to the Forty Foot Hole trail where they taught the youths how to rappel. The Forty Foot Hole is a canyon formed by West Cache Creek in the Wichita Mountains, according to www.summitpost.org.

"For me, that's just as important — that you gave your best effort, you believed in yourself and then you decided this isn't for me, this is too much," Jess Wedel said. "To me, that's also showing confidence and courage as well."

Her mother agreed, saying it was good that the girls were willing to try something difficult.

"I'm so impressed with that, it just speaks to the character of these girls that they were so willing to try something ... but for the thrill of it," Valari Wedel said. "It's just the fact that they were willing to get out of their comfort zone and try."

Lessons at the top

Both Wedels said they have gleaned valuable lessons on their mountain climbing excursions over the years. Valari Wedel said the Girl Scouts learned some of those same lessons during the recent excursion: including the importance of facing one's fears and conquering the unknown.

"It makes me so happy and I hope that's something they can sit back and go  'You know, I did that, I can do that — whatever that looks like.'"

Troop leader Dotson said the girls can't stop talking about their adventure in the Wichitas. And the rappelling excursion encouraged them to start planning another outdoor activity.

"They're just saying 'I want to go camping!'" the educator said. "I love this for them. It gives them something to look forward to."